In October 2016, we took over the care of 12ish year old Bonnie, a senior rescue dog with canine Cushings and near-deafness, and who had aged beyond her years, with lumps and bumps and non-malignant tumours abounding. She looked rough and unloved and had large sections on her chest and back flanks where hair didn’t grow. 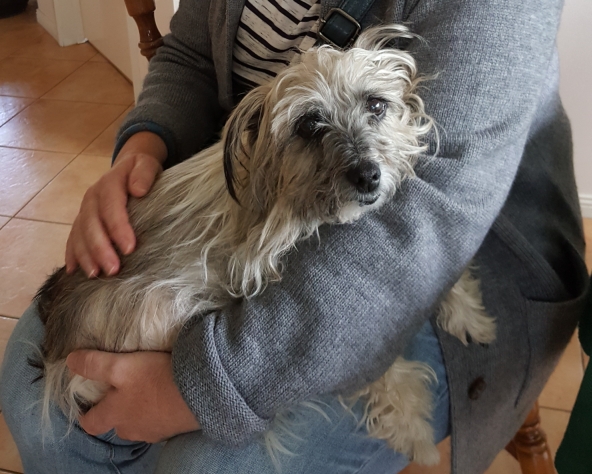 She was a most inquisitive little thing, trotting over to strangers, as if to say – “Are you my mother?”. I warmed to her immediately, and she only got better as she relaxed in our household.

It took a year or more of tablets before she stopped gulping down all her food in 5 mins, and making a beeline for poor old Fergus and his dish, and he developed anxiety about her stealing it all. But she never stopped with her incredible thirst, and did some famous wee trails as she walked, because I didn’t want it to pool around her feet. She walked pretty well, but never really figured out exactly which house we lived in. I’d do tests to see if she’d turn into the driveway without prompting but it rarely worked!

Although deaf, she’d make these cute little gulp sounds, snore loudly at night beside my bed, raise her front leg inquisitively when in doubt (like a lot of dogs), and sometimes struggle to get out of bed as her belly made her a body with legs. She’d sleep with her tongue out and take a minute or so on waking to realise it needed to go back in.

Over the last six months, she developed some routines –walk out the dog flap, do a complete circuit around the outdoor table and chairs, and drop down the brick steps to the tanbark sideway where she’d take her time finding the right spot to wee. Then rush back in, as if to say – hey I did the right thing, reward me now? We took her in the caravan for a month, and with her bad legs it was 2 times a night for me to take her out but hey, I was on hols so it didn’t matter.

Recently she figured out that laying in her human’s arms was not as scary as it seemed, and she seemed to like it more and more, but in short doses. She began to seek head and neck rubs more and more. 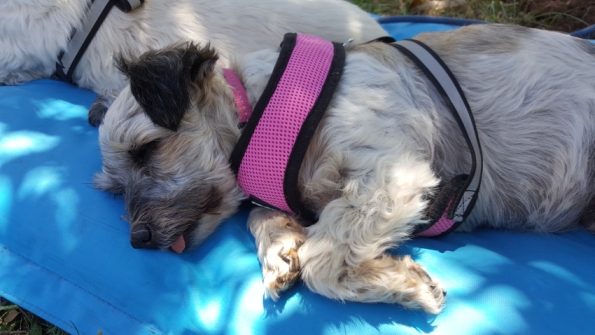 I just didn’t expect it would be over so soon, and even though she took the bulk of the dog attention because of her disease, and made walks an exercise in patience, I never minded any of it because I really loved this dog, and I’m embarrassed how few photos I took considering how much time I spent with her.

I’m happy that her downturn was pretty quick, and decisions were made for us, and I’m supposed to console myself that we gave her a really good 20 months, but it wasn’t long enough, and I bet she’d think the same thing because she had all the love in the world from us too. Goodbye BonBon, Bonza, my beautiful innocent girl – I’m really heartbroken and wish you were back with me.