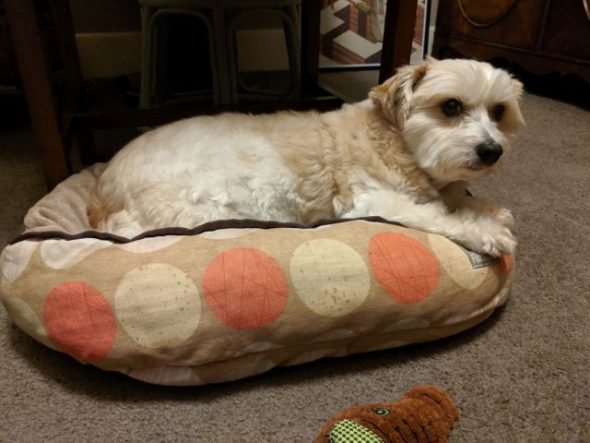 I rarely use this site for anything but book reviews anymore, but here and there other things need to be noted. And in the past 12 months there have been some high and low points. After Bonnie died so suddenly in mid 2018, I got it into my head in the months to follow that Fergus had lost some zest, perhaps even more than a 15 year old dog with faded hearing and dozens of benign lumps should. He just slept and slept. Kim and I debated it in a pretty casual way, and in building a case for another dog, my mind was tossing up how much effort it was to look after 2 dogs vs. 1, versus how much I wanted another dog around to give him more interest in life. It was inferred that it was on me to take most of the ongoing responsibility if we went down that path, probably because Bonnie had been quite a burden really.

Once again it took a lot longer than I wanted and I probably applied for about 8-10 dogs in varying states but generally older and with some health concerns, but I still rarely got a call back. I like how the rescue people take their caretaker role seriously but it made me anxious when they would talk about a meet and greet session which I knew Fergus would fail. I don’t know why he tries to chomp other dogs really. In the end we drove to Wodonga and in a highway roadhouse carpark met a free spirited young guy called Morgan who would do the rounds of outback NSW pounds and try and rehome them regionally or in Kyneton. Even then, he only let us take her because the previously approved adopters hadn’t got back to them the day before.

Leesa Cupcake was her name and she was really shy and kept wanting to get on Morgan’s lap and lick him on the face as a submissive act. We had the impression she had been part of pack of 3-4 dogs and hadn’t been on her own much. We took her back with us and it was interesting to watch her react to Preston. On the lead she had no idea what to do, and she mostly just followed Fergus with her head snapping at the slightest noises on the street. I don’t think she’d ever been in a city before. In the early months she was fantastic when meeting other dogs but over time this has changed as she’s become more confident and aggressive. She loves nothing more than lunging at birds or getting a head of steam up approaching other dog houses.

I’m so happy she is a healthy 8 year old and isn’t too dominant with Fergus. I think he’s picked up a lot since getting her and I see him watching her and following her as he trusts her eyesight and ears. She gets into bed with him sometimes out of boredom I suspect and he stands up irritated and moves over to her bed and spends ages mussing it up till it’s how he likes it. She’s put on a lot of weight too, thanks to our overly generous treat regime. It makes me excited that we’re about to take her on a caravan holiday to the beach which she’s likely never been to before. I bet she will love chasing the birds there and I’ll take some video for sure.